Can you combine beer pong, bowling and fine dining inside a single venue? Wonder Stuff Studio was asked to do just that. The creative agency helped actualize the concept of Lane7, a one-of-a-kind bowling alley that balances the amenities of an upscale eatery with the casual vibe of a Brooklyn night out.

Brandfolder spoke to Merlin Duff, brand and creative consultant at Wonder Stuff Studio, about how to create a single cohesive experience that encapsulates a variety of different experiences and activities. 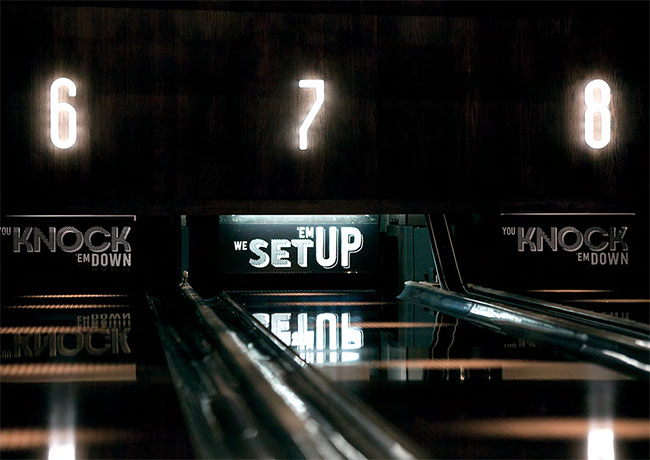 Square One: Naming a Brand and Creating the Concept

Luxury bowling is becoming common in elite resorts and casinos, but the concept is unfamiliar to the average consumer. This posed a challenge for Wonder Stuff Studio during the naming process, because they had to choose an identity that was enticing, memorable, and informative all at the same time.

“There was absolutely nothing like this when we started the project. So to introduce this to people, we knew we had to be comfortable and come out fighting with a bold, confident attitude” Duff explained.

While the word “Lane” makes an obvious reference to bowling, the 7 is also a subtle ode to the 1,024 outcomes that are possible during a single game of bowling. It also creates an air of prestige and exclusivity.

Once the name was settled upon, Wonder Stuff turned to typography and graphic design inspired by 1950’s New York to help style the logo’s font. The logo is an ambigram that reinforces the constant movement of a round bowling ball along slick wooden lanes. 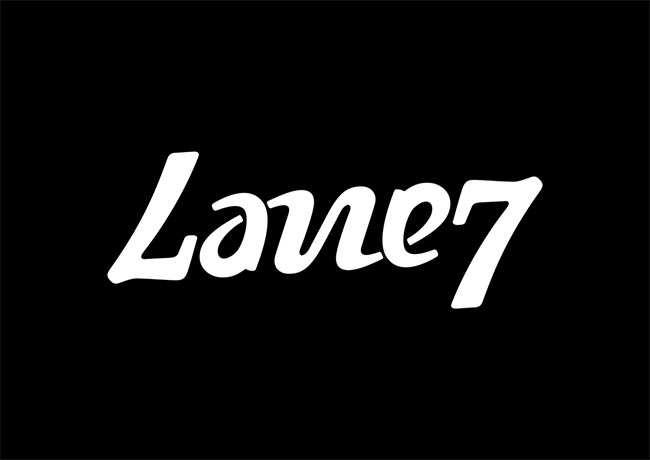 Next Up: Building an Atmosphere

Wonder Stuff had to create a setting that would cater both to upscale clientele as well as the average consumer. Since the client had already chosen New York as the interior inspiration, Wonder Stuff gravitated towards an urban-chic warehouse vibe to help these two opposing atmospheres blend seamlessly together.

“The dark color of the walnut lanes dims the atmosphere, leaving the opportunity to evoke a specific mood through creative lighting” Duff noted. Most bowling lanes are made of cheaper wood such as beech or pine, so the walnut adds a more sophisticated element.

The interior design helped reinforce the synthesis between a luxurious feeling and a laid back vibe.

“Much of the industrial lighting in Lane7 was salvaged by interior designers from flea markets around the UK, and a vintage clock from the Prague main railway station hangs on a wall inside the darkened cosmopolitan space” he added. 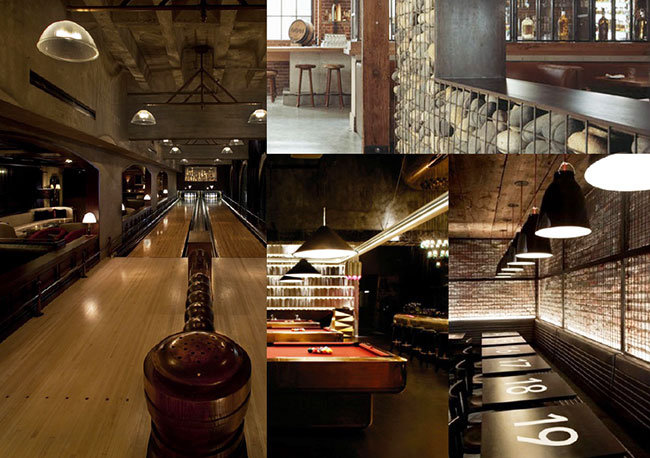 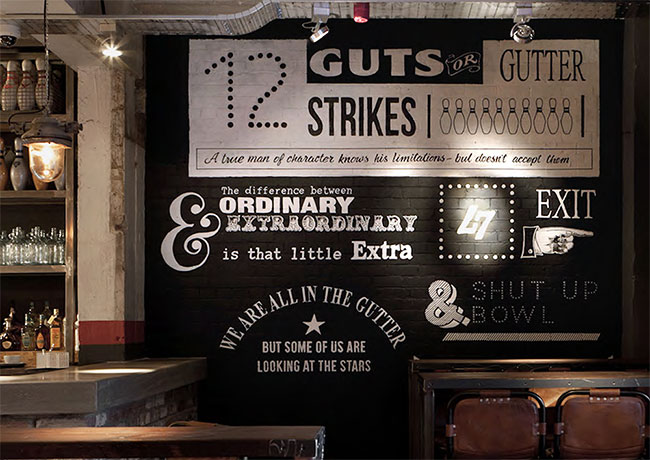 The Finishing Touch: Establishing a Distinct Style and Voice!

To clearly articulate the voice of the Lane7 brand, Wonder Stuff covered the interior walls with witty signage.

“We knew there had to be styling and substance to the interior, so one of the key things we did at the beginning was establish a playful voice with a bit of sass,” he adds. Quotes such as “shut up and bowl” and “we are all in the gutter but some of us are looking at the stars” are lettered in hand-drawn typography to infuse character and fun into the high-class venue.

“When we came up with ‘shut up and bowl’ early on, we agreed that it was something we could use with graphic language as well as other material graphics that needed styling” said Duff.

Once Wonder Stuff was confident that the venue’s interior design hit the right tone, these taglines were applied to print and online material. Quirky digital graphics kept the sass coming so Lane7 would attract young, edgy consumers on social media. 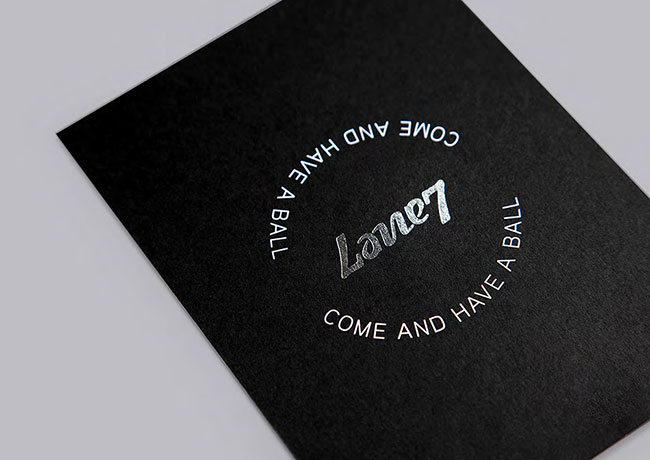 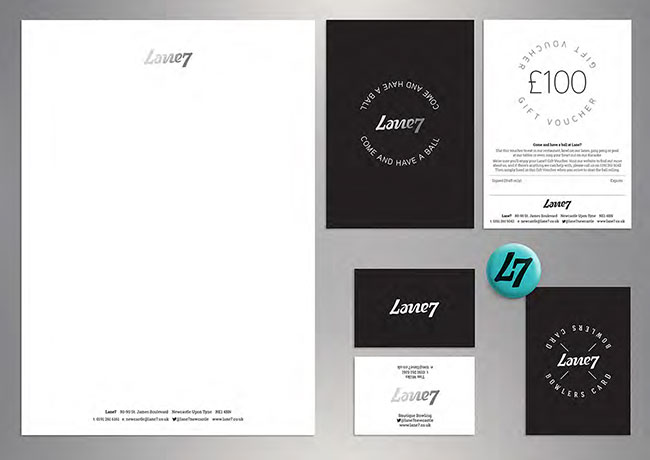 What Can You Learn From This Branding Project?

Branding a luxury bowling experience may not be at the top of your to-do list, but Lane7’s story offers plenty of branding insight–whether you’re tasked with creating a retail space from scratch or simply naming a new feature of a SaaS platform. When you have a clean slate to work with, the key is to establish concrete and unique brand values. This will help you deliver a coherent brand identity across all elements, from the physical atmosphere to digital design and written materials.

“Every element has to have a deliberate style and approach. From what clothes the staff wears to the taste of the food and drinks served—everything should be one consistent experience” Duff concluded. 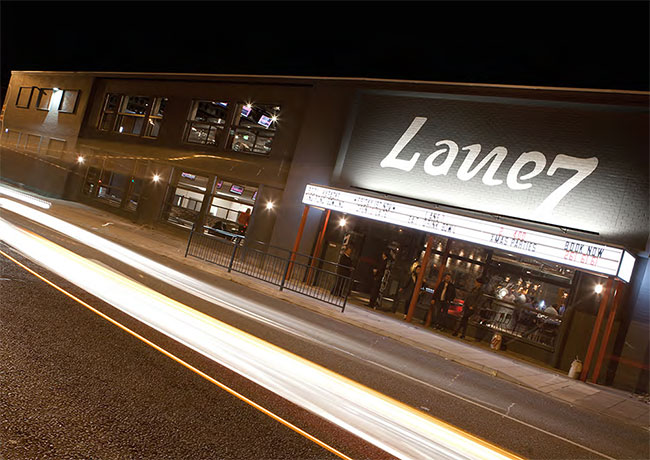